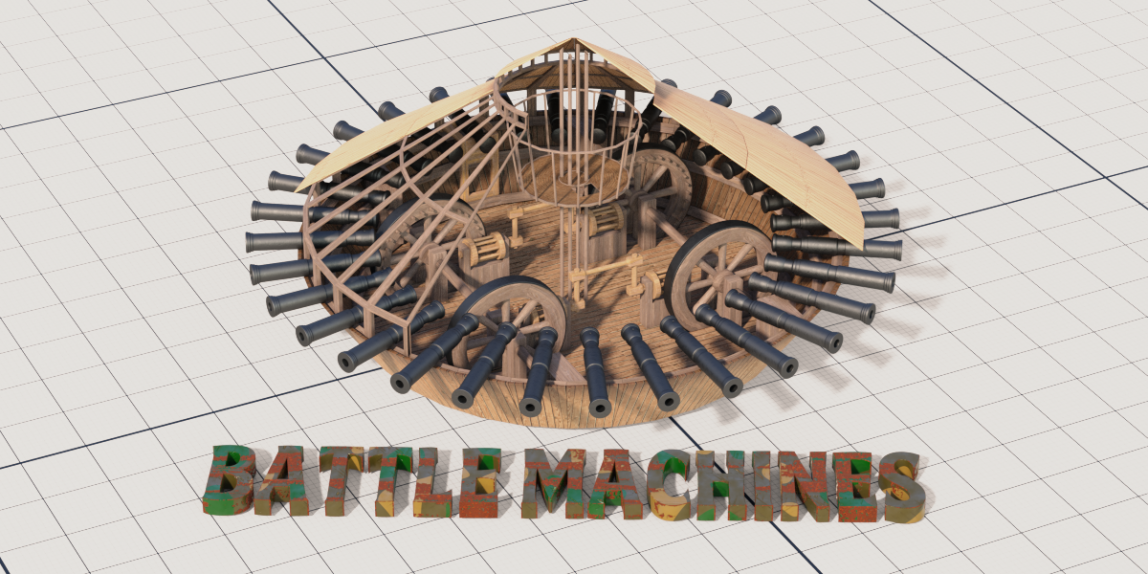 You can support my work by buying cool stuff like prints, metalprints, T-shirts, stickers and much more.

Leonardo di Ser Piero da Vinci was a gifted Italian architect, sculptor, painter and inventor. He was a versatile genius with a wide range of interests and knowledge, as evidenced by the fact that he helped, among other things, to develop scientific disciplines such as anatomy and astronomy.
.
As no one is born a master, even a gifted genius like da Vinci makes mistakes. Let’s take a look at one of them now. And that’s DaVinci’s tank.
This model was created according to the original daVinci drawing while maintaining the original proportions.
Since there are no dimensions given by daVinci, I chose the crank as the starting point and I adjusted the size of the tank so that the soldier was able to turn it.
It’s not perfect, but it is the best size if I didn’t want to change the original proportions of the tank.
I know two facts about the number of soldiers needed to move the tank. One is that da Vinci needed four soldiers, two on each of the two cranks. The second variant speaks about 8 soldiers, 4 on each of the two cranks. Based on the weight of the tank, even 8 soldiers wouldn’t be enough, but based on the size, we must go with two soldiers on each crank.
Another problem is the overall design of the drive mechanism. According to the original drawing, the wheels would rotate in opposite directions. Experts on da Vinci’s work assume that he drew it that way on purpose so that his invention would not be misused by the wrong people.
Let’s look at ways to fix this.
The easiest and fastest way to fix it would be to cut the handle, which would allow each wheel to turn independently. But this is not the same as when two soldiers control two wheels together. The problem is the loss of power due to poor synchronization and the increased possibility of one wheel getting stuck on an obstacle. In our case, this is still just a theoretical possibility, because two soldiers will not fit on one crank.

The second option is to narrow the front axle and turn the wheels the way that the drive wheel of the transmission powers the driven wheel from the opposite side, thus achieving the same speed for all wheels.
The chassis and drive mechanism weigh about one ton. According to the original drawing, the tank has 32 cannons, that together weigh more than 8 tons. Cannons from this time period were loaded from the front, so it would be impossible to load them during battle. Therefore, let’s assume that they are loaded and only four artillerymen are enough to fire them. The crew also doesn’t need to carry cannonballs and gunpowder, which saves weight. The roof of the tank weighs about 800 kg. So together the weight of the tank including the crew is about 10 tons.
Another problem is darkness. Almost nothing is visible in the interior. The only source of light at that time was fire. I don’t know about you, but I really wouldn’t want to be on the battlefield in a wooden tank lit by candles or torches.
The Davinci tank has many problems, some can be fixed, some cannot. It should be kept in mind that da Vinci has built more complex machines. This is just a sketch and he didn’t actually build the tank. He probably knew that it didn’t make sense, because at that time there was nothing that could power something so large and at the same time be hidden in the bowels of the tank and safe from enemy attacks.
You could write a whole book about the tank, and this video we don’t have the time to explain and solve ever problem. I may return to this topic later based on your comments, but the main goal of this series will be to show rare, unknown, often insane drawings and prototypes, as well as successful historical tanks and other combat weapons.
And you know what to do, so you don’t miss it.
Thank you for watching.

Enjoy my work? Please help me spread the world :)

We use cookies to ensure that we give you the best experience on our website. If you continue to use this site we will assume that you are happy with it.Ok